Airto Moreira was born in 1941 in the small village of Itaiopolis – south Brasil, and was raised in Curitiba. Even before he could walk he would start shaking and banging on the floor each time the radio played a hot song. This worried his mother, but his grandmother recognized his potential and encouraged him to express himself. By the time he was six years old he had won many music contests by singing and playing percussion. The city gave him his own radio program every Saturday afternoon. At thirteen he became a professional musician, playing percussion, drums, and singing in local dance bands. He moved to Sao Paulo at the age of sixteen and performed regularly in nightclubs and television as a percussionist, drummer and singer.
In 1965 he met the singer Flora Purim in Rio de Janeiro. Flora moved to the USA in 1967 and Airto followed her shortly after. When in New York Airto began playing with musicians such as Reggie Workman, JJ Johnson, Cedar Walton and bassist Walter Booker. It was through Booker that Airto began playing with the greats – Cannonball Adderley, Lee Morgan, Paul Desmond and Joe Zawinul, to name a few. Zawignul recommended Airto to Miles Davis for a recording session in 1970 for the “Bitches Brew” album. Davis then invited Airto to join his group, which included such jazz icons as Wayne Shorter, Dave Holland, Jack DeJohnette, Chick Corea and later John McLaughlin and Keith Jarrett. He remained with Miles for two years, and appears on such releases as “Live/Evil”, “Live at the Fillmore”, “On the Corner”, “The Isle of Wight”, “Bitches Brew” and later releases including the “Fillmore Sessions”.
Following his stint with Miles Davis, Airto was invited to form the original Weather Report with Wayne Shorter, Joe Zawinul, Miroslav Vitous and Alphonse Mouzon with whom he recorded “The Weather Report”. Soon after, he joined Chick Corea’s original Return to Forever group with Flora Purim, Joe Farrell and Stanley Clarke and they recorded the albums, “Return to Forever” and “Light as a Feather”. 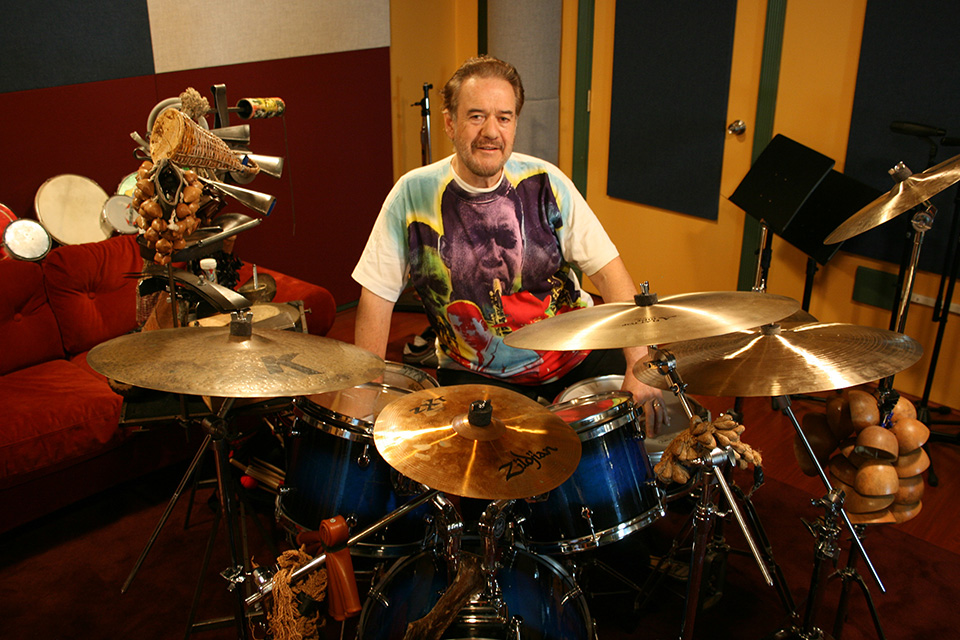 In 1974 Airto formed his first band in the U.S., “Fingers” with Flora Purim. Since then they have performed constantly all over the world and recorded their own albums for major record companies in Europe and America. Airto remains one of popular music’s most in demand percussionists. His collection of instruments, along with his knack for playing the right sound at the right moment, has made him the first choice of many producers and bandleaders. His work with Quincy Jones, Herbie Hancock, George Duke, Paul Simon, Carlos Santana, Gil Evans, Gato Barbieri, Michael Brecker, The Crusaders, Chicago, and many others including contributions to movie sound tracks such as The Exorcist, Last Tango in Paris, King of the Gypsies and Apocalypse Now, represents only a small number of the musical contributions Airto has made over the last three decades.
His impact was so powerful that Downbeat magazine added the category of percussion to its readers and critic’s polls, which he has won over twenty times since 1973. In the past few years he was voted number one percussionist by Jazz Times, Modern Drummer, Drum Magazine, Jazzizz Magazine, Jazz Central Station’s Global Jazz Poll on the Internet, as well as in many European, Latin American and Asian publications.

He has been advancing the cause of world and percussion music as a member of the “Planet Drum” percussion ensemble, with Mickey Hart, drummer for “The Grateful Dead”, and master conga player Giovanni Hidalgo and tabla virtuoso Zakir Hussain, along with Flora Purim, Babatunde Olatunji, Sikiru Adepoju and Vikku Vinayakram. Planet Drum won a Grammy Award in 1991 for World Music. Airto also contributed to another Grammy Award winning ensemble, “Dizzy Gillespie’s United Nations Orchestra”, which received the award for Best Live Jazz Album.
One of Airto’s recordings for the Melt2000 label, “Killer Bees”, features Herbie Hancock, Stanley Clarke, Chick Corea, Mark Egan and Hiram Bullock; it was one of the most critically acclaimed albums on the European market. His solo album entitled “Homeless”, on Melt2000 was released in the year 2000. It is a high-energy album with “tribal” rhythms that is shaking the dance floors around the world. Other releases on this label include the group “Fourth World” with Jose Neto and Flora Purim.

His song “Celebration Suite” was re-mixed by the DJ group “Bellini Brothers” entitled “Samba de Janeiro”. The track hit #1 in the dance music charts over 26 countries around Europe, Asia and Latin America.
In 2001 when Airto recorded with Kodo, he contributed with two of his compositions: “Maracatu” and “Berimbau Jam”. The song “Maracatu” was chosen to be one of the official songs for the 2002 World Cup in Asia to open the ceremonies for the event in Japan.

In September of 2002, Brazil’s President Fernando Henrique Cardoso named Airto Moreira and Flora Purim to the “Order of Rio Branco”, one of Brazil’s highest honors. The Order of Rio Branco was created in 1963 to formally recognize Brazilian and foreign individuals who have significantly contributed to the promotion of Brazil’s international relations. The order is named after Barão do Rio Branco, Brazil’s Minister of Foreign Affairs from 1902 to 1912, famous for his role in negotiating the national borders of Brazil and referred as the “Father of Brazil’s Diplomacy”.

Airto has worked together with and had his music re-mixed by Frederic Galliano, Giles Peterson, Endemic Void, Justice, Ashley Beedle, Circadian Rhythms, Jimpster, Amon Tobin, and Max Breenen, among others.
For three years Airto was a professor at the Ethnomusicology department of UCLA, and broke new ground in musical concepts and creative energy.

Airto’s latest album, “Life After That” was released on Narada Records on September 30th, 2003.

In 2006 Airto was featured on in one of the 5 CD box-set release by Chick Corea, entitled ‘5 Trios’. Along with Chick Corea and Eddie Gomez, they recorded the ‘The Boston Three Party’ at the Berklee Performance center, in Boston MA.
Currently he divides his time between recording studios, workshops and clinics, creating new projects including Video Surround Sound, as well as researching new materials for future releases, and live performances in the US, Europe, Asia and Latin America.