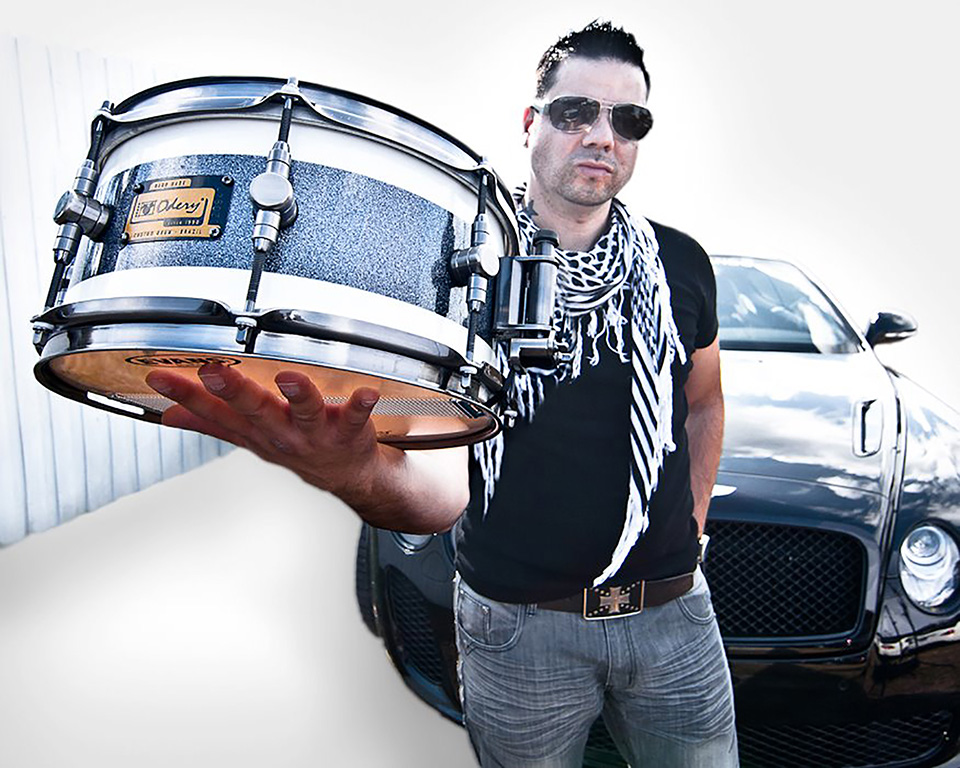 “Playing an Odery Custom drum set is like driving a Bentley, an
experience…” Lou Santiago Jr

Thirty-five year old drummer Louis Santiago Jr. has already had a remarkable musical career that is the stuff urban legends are made of. Born in New York City in 1976, Lou did not purchase his first drum set until he was eighteen. After two years of eight to twelve hours of daily practice, he quit playing and joined the Navy – intent on earning tuition money to attend the Drummer’s Collective in New York City. Five years later, during his last year of enlistment, Lou finally picked up his sticks again and, incredibly, after eight months of practicing, won the 2001 Guitar Center South East Regional Drum-Off, placing him 7th in the nation. Two years later, in 2003, he won the over 18 age division of Modern Drummer’s “Undiscovered Drummer” contest and then toured with legendary trumpeter Maynard Ferguson and his Big Bop Nouveau Band. “Louis is without a doubt one of the most exciting new young drummers on the scene. He is dedicated to his craft and I look forward to watching the progress of his career!” – Maynard Ferguson. Since then, Lou has gone on to work with some of the industry’s finest artists, such as afro-cuban/jazz bassist, John Benitez, Composer/Bassist Adam Nitti, German bassist, Martin Engelien, Worship Leader/Pastor Marco Barrientos, Raul Sanchez, Lamar Boschman, Seventh Day Slumber, Jeff Deyo and Natalie Grant, this is just to name a few! In addition to performance ministry, Lou has a passion for teaching. He is part of the faculty at the following worship/music schools and conferences: IWI (International Worship Institute), PWI (Pure Worship Institute), DFJ (Drummers for Jesus), and Thunder School Nashville. Lou has also been very successful as a secular clinician, inspiring and influencing drummers of all ages both in Europe and the United States. Highlighted in Modern Drummer Magazine, Lou says his goal is, “To become a better person and drummer than I was yesterday. I sincerely believe that music both inspires and speaks to people. I pray that my drumming does the same. This isn’t just a job or hobby for me. I understand fully that it is a gifting given to me from GOD to further his kingdom.” After playing for little more than 4 years, Lou’s prodigious talents have earned him endorsements from Odery custom drums, Sabian cymbals, Evans drumheads, Vic Firth drumsticks, Gibraltar hardware, Gon-Bop Percussion, Shure Microphones, CTM custom in-ear monitors and Souldog clothing.