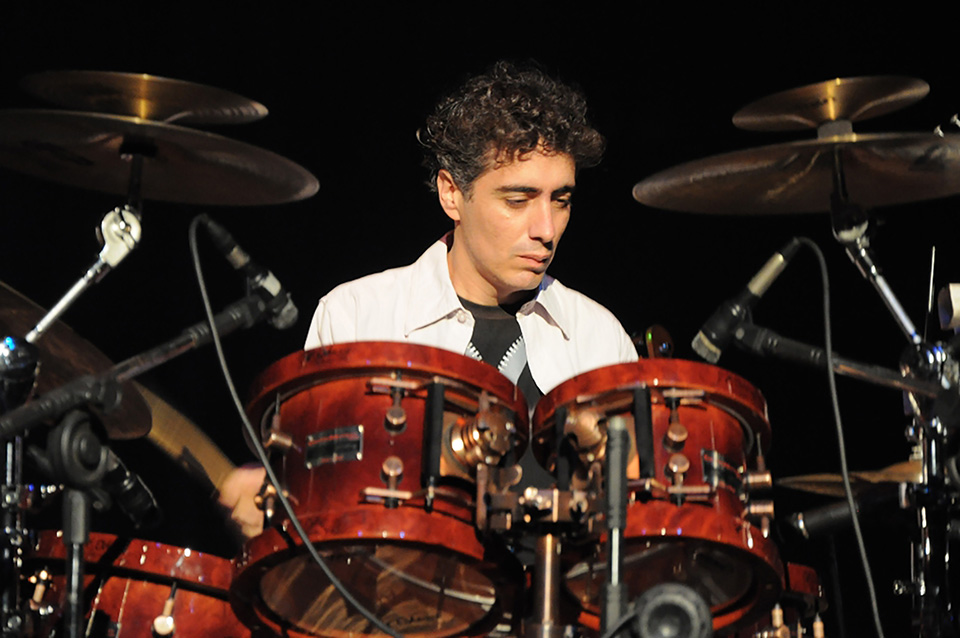 A professional drummer for 27 years, Alexandre Cunha, has always wanted to play his best music. This desire that led him to live in Germany from 1994 to 1997, where he performed in the best local jazz clubs, and developed unique way of playing Brazilian music.

Back in Brazil, Alexandre started the Brazilian Duet – a duet with two drummers playing Brazilian rhythms that earned international critical acclaim. The Duet project was released in DVD in 1998 and traveled across the country in more than 100 shows/worshops.

Alexandre developed the unique ability of playing Brazilian patterns in two pedals at the same time with only one foot, a technique that influenced a whole new generation of Brazilian drummers.

Renowned American drummer, Chuck Silveman has spoken highly of Cunha: “As soon as I began watching this video, I knew that the Brazilian Drumming Duet was something special. Ramon and Alexandre communicate their love for drums and for Brazilian rhythm and music clearly and powerfully. I found myself watching the video over and over. I hope to soon meet these two young musicians and form a long lasting friendship”.

In 2005, Alexandre released his first record, Batepapo, an album that included performances of some internationally recognized names of Brazilian music such as Airto Moreira, Dominguinhos and Alegre Correa. Batepapo is a mix between Brazilian traditional music and the technique and feeling of fusion. Smoothjazzandmoreranked Batepapo among the 10 best jazz of 2005, and Allboutjazz described Alexandre as “an endlessly inventive master drummer “ and Batepapo as “a wonderful entrée to the world of Brazilian music”.

Since 2004, Alexandre has been writing an editorial section for Modern Drummer Brazil, and writes articlesforwww.drummerszone.com

Alexandre is endorsed by some of the best drum brands in the music industry. Besides Odery Drums, Alexandre plays UFIP Cymbals and Evans Drumheads.

In 2008, Alexandre released a DVD featuring his drum soloing techniques. In the same year, Alexandre’s Group was the first-ever Brazilian group to play at the Shanghai International Jazz Festival, one of the most important jazz festivals in Asia. The group also toured China and played at several jazz clubs. The performance at the Shanghai International Jazz Festival was recorded and released as the Live in Shanghai DVD. Alexandre’s performance at the festival was considered a favorite by Chinese website Shanghai Scene.

In 2010, Alexandre released his third album, Barulho Bravio, a record that ranked among the most played on the Canadian jazz station Chuo-FM. Alexandre also toured in Chile in 2010, where he played at one of the country’s most important cultural venues, Fundación Pablo Neruda.

In 2011, Alexandre’s Group did another long tour in Asia playing in festivals such as:

In 2012, Alexandre restarted doing shows and workshops with the Brazilian Duet.

In 2013, Alexandre was invited to the 9 Beats Drum Festival, one of the biggest drum festivals in China.