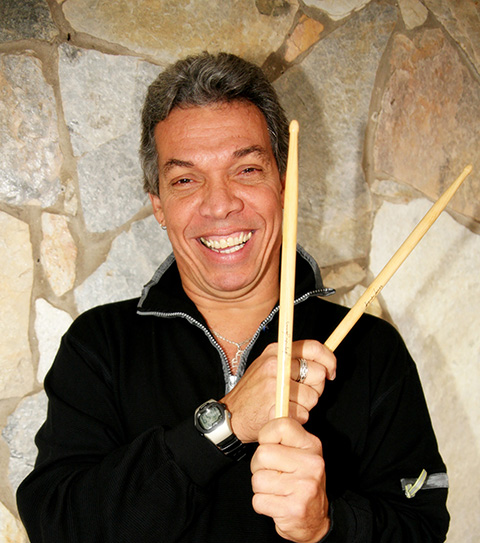 After a career of 42 years, in 2008, it’s a little hard to remember everything I’ve already done, and all the music icons I have the honor to work with. I was born in a musicians family. My father was a radio singer, and my mother was a piano teacher. In spite of it, I’m self-taught. I have 9 brothers and sisters, and all of them play some instrument.

In 1967 I setted up my first group, “The Cats”, together with two brothers (I was 11). After that, came the “Os Príncipes do Ié-iéié”, with my brother Pepeu Gomes. At that time he was a bass player. In the middle of that year me, Pepeu, and two other boys with the same age (under the responsability of the father of those boys) left Salvador heading to São Paulo.

Throught the next 6 months we kept on playing with “Os Príncipes do Ié-ié-ié”, and then we was endorsed by a clothes shop called Minos, and because of that we became “Os Minos”.

Between 1967 and 1968 we recorded our first albun, called “Febre de Minos”, the first albun in my career. It was a double compact, and I was 12. We appeared in the main TV shows of the time, as “Mini Guarda”, “O Bom”, with Eduardo Araújo and Silvinha, and “Clube do Bolinha”, among others.

In 1970 we get back to Salvador and the group splited of. I setted up a new group, “The Leifs”. We made a lot of TV shows in Bahia and. It was in one of that local shows that the “professor” Gilberto Gil saw us, and invited us to play in farewell show for him, and Caetano Veloso, because them both was going to exile. From that came the famous album “Barra 69”.

In that show, among the public, there was Moraes Moreira, Galvão, Paulinho Boca de Cantor, Baby Consuelo (today know as Baby do Brasil). We all met and decided to make some music.

We created a show called “Landing of the Animals after the Universal Deluge”, but the band has no name yet. We decided leave Salvador, heading to São Paulo, and lived all together aside the Danubio Hotel. We recorded our first albun “Ferro na Boneca”, and then the name came up: Os Novos Baianos.

At that time I was between 14 to 15, and was invited by Lenny (a famous Tropicalia guitarrist) to play in his father’s club, the Star Dust. I worked for 6 months in the club, and there was two pianists: nothing less than Hermeto Pascoal, and Sivuca! What a school!

I was minor, so when the police show up I had to hide in the restroom (laugh)! After this time of wonder I had to get back to Salvador, just because I couldn’t stay without someone major in charge over me. There, I formed another band, and played with them until I was 17.

Between 1971, and 1972, “Os Novos Baianos” went to Rio de Janeiro, and then my brother Pepeu could assume the responsability for me. It made the group to consolidate.

In Rio, we was 25 people sharing a penthouse in Botafogo. There we had the privilege of meeting João Gilberto. He oppened to us a new, and wonderful window to the musical universe. The Novos Baianos’ history is divided in before, and after João Gilberto.

In Rio I met several musicians, including Paulinho da Viola, who gave me a cavaquinho (my first one, what a honor!). After that came the other albuns, such as “Acabou Chorane” (considered the century’s best albun by The Rolling Stones Magazine), “Novos Baianos Futebol Clube”, “Vamos pro Mundo” (without Moraes Moreira), “Cai na Estrada e Perigas Ver” (whithout Dadi), “Farol da Barra”, and the last one “Praga de Baiano”… Hope I didn’t forget none!

In 1978 I was called by the “professor” Gilberto Gil to play in his band.

In 1985 I joined “A Cor do Som”, and we recorded an albun called “O Gosto do Prazer”. The title music has harmonic by me, and lyrics by Gilberto Gil. At the time, this music was theme for the soup-opera “Hipertensão”. The band worked for a year, and then I get back to “professor” Gil’s band, and I have proudly played with him for 20 years. Gilberto Gil is very important to me: he gave me my first drum set, when I was 14.

The musicians with I had the honor to play:

And I appear as special invited:

That’s all for now! Wait for scenes from the next chapters!